Pirates know what sells in their market. While content redistribution over the internet is a major global problem, we shouldn’t overlook control word sharing.  In Africa, this is still a highly profitable business for pirates.  Well, until they’re raided and sentenced that is!

Setting the scene
As part of a long running investigation working with Multichoice Africa Limited (MAL), a cybercrime syndicate was identified in Egypt. The intelligence indicated that the syndicate was manufacturing and distributing subscription-based pirate boxes which provided unauthorized access to premium content from several international broadcasters.  With this evidence a joint criminal investigation referral was made to the Egypt Ministry of Internal Affairs. 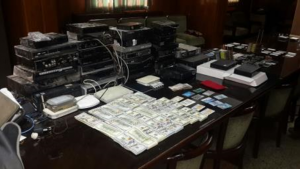 The technical forensic analysis performed by Irdeto confirmed the number of pirate viewers as well as the extent of the pirate’s geographic satellite footprint. All of which contributed to the legal evidence to support the successful criminal prosecution.

Pirate conviction
Although the judicial process can take time, it’s an essential part in the fight against piracy. The convictions send a strong message to the pirate community that piracy is a serious offence that won’t be tolerated.  More details about the conviction can be found in our press release.

Unmasking the real people behind pirate organizations
As you can see to fight piracy, you need more than technology alone. Whether it’s related to control word sharing or other types of online piracy, it is the proactive services delivered by experienced investigators and analysts that are essential to identifying the individuals within the pirate organizations.

In my experience, the winning formula to fight online piracy requires a combination of:

Online piracy is a growing industry wide problem. And as this example shows, to be successful in fighting the pirates it is investigative skills and teamwork that makes the real difference.