Increase in Piracy During Pandemic Lockdown

The novel coronavirus, COVID-19, has dramatically changed the lives of billions of people worldwide.  Non-essential businesses, tourist destinations, parks, and beaches are closed, and economies are at a standstill.  People around the world are staying home to contain the spread.

The New York Times reported at least 311 million Americans — about 90 percent of the country — are confined to their residences, only venturing out for essential needs.  Over 1.5 billion people worldwide are on some variation of lockdown, and even in countries or states where lockdowns are slowly being lifted, there are still economic and social restrictions. The world is learning a new normal;  juggling remote work and homeschooling, planning weeks at a time for grocery delivery, exercising at home and holding virtual social events including weddings and birthdays.

People are seeking new ways to entertain themselves while staying safe at home.  Not surprisingly, there have been huge surges in sales of jigsaw puzzles, video games, and toys.  Several OTT providers such as Disney +, Netflix, HBO Now and Showtime have also seen a dramatic increase in streaming usage as well as an influx of new subscriptions.

Unfortunately, piracy is also on the rise.

In one recent example, since the beginning of the pandemic, coronavirus fears have led to increased interest in Steven Soderbergh’s 2011 film “Contagion”, which documents a fictional global pandemic.  According to Warner Bros., the film rose from No. 270 among its catalog films at the end of December 2019 to No. 2 in the beginning of 2020.

This increase in demand did not go unnoticed by pirates.  Pirate downloads of “Contagion” surged from hundreds of downloads per day on torrent sites to tens of thousands.  YTS, one of the most well-known torrent sites, responded to increased demand by releasing two new high-quality – 720p and 1080p Blu-ray rips.

Following the implementation of several state-mandated measures including school closures and “safer at home” mandates, Irdeto observed a marked increase in pirate downloads.  In the second half of March, Peer to Peer traffic monitored by Irdeto increased from an average of 9,600 GB daily downloads to 10,750 GB, a steep 11.5% increase. 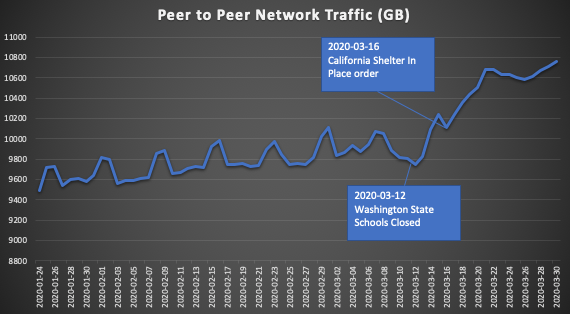 Similarly, from February to March 2020 SimilarWeb statistics show an average 19% rise in website traffic to the top 10 pirated web streaming sites tracked by Irdeto, an increase of almost 4 million visits.

While piracy is not a new phenomenon, during these unprecedented times piracy may continue to rise, particularly given the lack of new content and high demand.  For example, Major League Baseball is considering broadcasting a shortened season in May with teams playing in one, or possibly two locations, to stadiums without fans.  If this is the case, the hunger for live sporting events will make these rare broadcasts prime targets for piracy.

The longer people are confined to their homes, the greater the appeal for new content, and the easier it will be for pirates to profit.  Protecting valuable content from piracy will be invaluable as we navigate through this uncertain time.